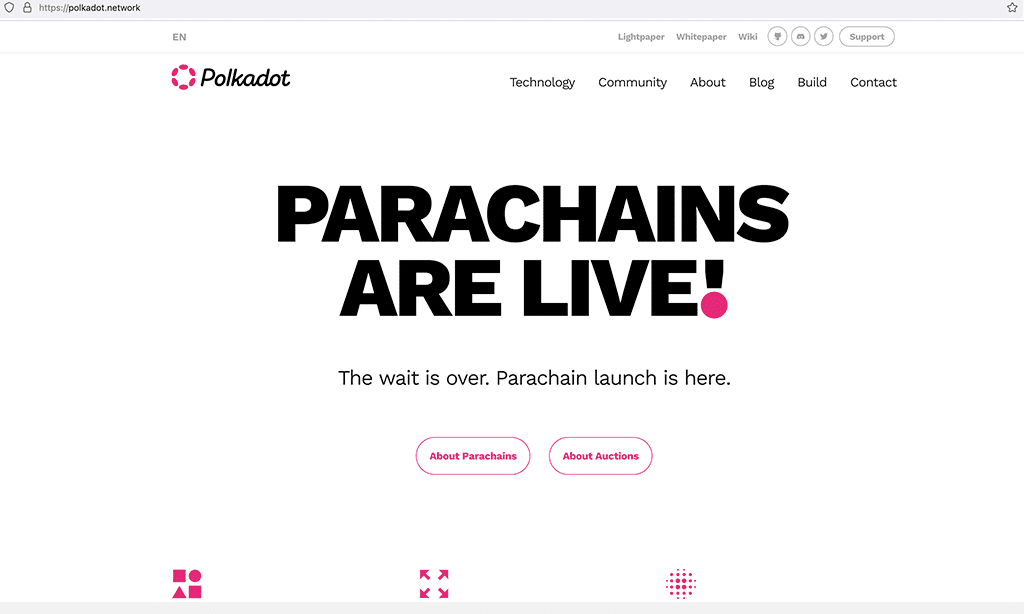 Polkadot (DOT) is one of the most popular blockchains for distributed computing. It connects separate cryptocurrency networks to create a single, unified ecosystem.

Polkadot is a ‘multi-chain’ network. User-created blockchains which integrate Polkadot (known as ‘parachains’) can communicate over the Polkadot network. Parachains can also use Polkadot to communicate with external networks including Bitcoin and Ethereum.

Polkadot stands in contrast to other attempts to connect disparate networks in that participating chains remain decentralised. Blockchains in the Polkadot ecosystem don’t sacrifice any of their autonomy. Instead, they run in parallel as parachains and retain governance over the data on their blockchain. Each of Polkadot’s parachains connects to the central ‘relay chain’, which secures the network using a proof of stake (PoS) consensus mechanism. Polkadot seeks to support up to 100 separate parachains, each running in parallel and secured through the relay chain.

Polkadot’s relay chain enables the security of its parachains using a specific proof of stake mechanism called ‘nominated proof of stake’ (NPoS). Holders of the DOT token act as nominators, who can endorse specific validators on the network. These trusted validators then validate transactions within the protocol.

Nominators and validators are rewarded in DOT for their efforts, and their staked tokens also act as collateral to ensure they reach consensus. DOT is also used for governance of the Polkadot network; any potential changes are voted on through stake-based ‘referenda’. This ensures that token holders can be active in the future development of the network.

Polkadot’s bridges enable two-way communication with networks outside of the Polkadot ecosystem, such as Bitcoin and Ethereum. Bridges enable blockchains with vast technological differences to communicate. The Polkadot community places a high value on trustless bridges, rather than systems where users rely on a trusted middleman to process cross-chain transactions.

Polkadot’s focus on interoperability between different blockchains has made it very appealing to developers and startups working on new blockchain projects and dApps. Rust is the foremost language in the Polkadot ecosystem, but development takes place in a variety of programming languages. Substrate is a framework for building application-specific blockchains which can be easily extended to function as parachains within the Polkadot network. The Polkadot community provides resources for building a parachain with Substrate.

For smaller applications, Polkadot also allows the creation of ‘parathreads’. Whereas parachains produce new blocks in tandem with the relay chain, parathreads only create blocks when they are needed. This makes the upkeep costs of maintaining a parathread far lower than a parachain. Polkadot’s variety of development opportunities makes it an appealing choice for secure and decentralised blockchain projects where cross-chain communication is important.

Learn More About Development and Polkadot

Official guidance on building a parachain or parathread for Polkadot can be found at polkadot.network/build and Polkadot’s wiki.