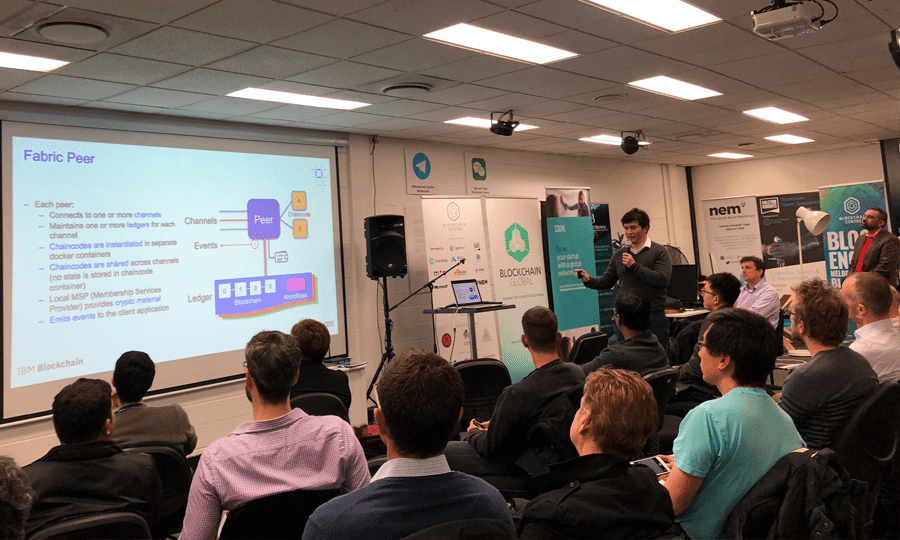 The Blockchain Centre in Melbourne recently hosted an evening session on Hyperledger Fabric.

Hyperledger is collection of Open Source frameworks and tools for blockchain development. The project was started by the Linux Foundation in 2015, and now has a global team of developers (from around 200 companies) and has been used in many production projects. It’s in the same space as other distributed ledger technologies such as Ethereum and Corda, all with their own pros and cons.

I’ve heard Hyperledger explained as an “Enterprise Blockchain”, but beyond the buzzwords, many businesses have successfully deployed applications using Fabric. Often businesses require private permissioned blockchains (as apposed topublic and permissionless), in environments where systems know each other, yet transactions still need to be secret. There are exceptions, to this, but it seemed to be where most of the questions from the audience on the evening revolved around.

Hyperledger Fabric uses containers (that are freely available to download as Docker containers) as the base for blockchain applications using what they call chaincode. Chaincodes can used for both smart contracts and tokens. Fabric users the concept of channels to maintain scope/privacy for different ledgers.

Dileban Karunamoorthy (@dileban) and Dain Liffman (@dainliff) from IBM each delivered the following talks, the slides for both talks (shown below) illustrate blockchain basics, Hyperledger fundamentals, examples and further resources.

The slides had a few minor changes/updates, but these decks included most of the main concepts.

Does your application have a valid use-case for a blockchain?

With blockchain technology being surrounded by a lot of hype, it’s important to understand why you would want to develop a blockchain application. Quite often there isn’t a valid use-case. Blockchain ledgers are best suited to scenarios where there’s a strong requirement for collaboration, competition and trust. Typically these applications are larger in scale and borderless.

If you’re into some educational geek humour, check out doyouneedablockchain.com, and the paper by Karl Wüst Arthur Gervais exploring whether or not a blockchain is the appropriate choice of technology.

You can find our more about Hyperlegder at the offical website:

And the developer docs for Fabric:

Thanks to the Blockchain Centre and the speakers for a good evening.